FINALLY the reveal I was hoping to give you all yesterday. My couch dying drama has come to a beautiful conclusion!

Here is where we started: 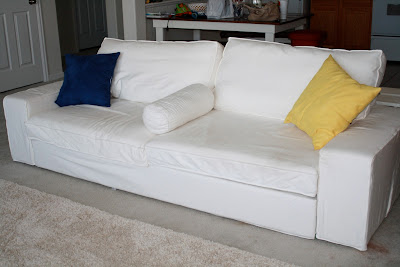 Our beautiful stark white couch was amazing, except that it looked dirty all.the.time and I wanted something that I could live on.
So we picked up some Gunmetal Gray dye from the store, and voila: 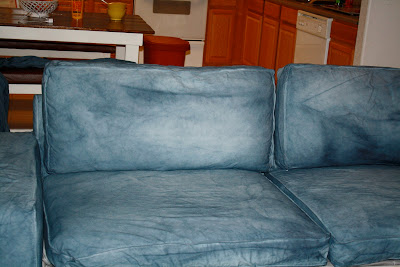 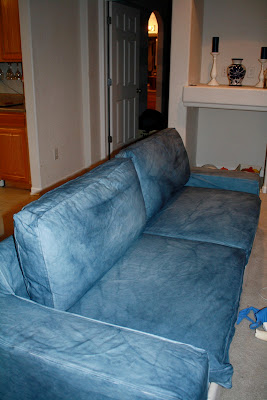 Acid washed 80's jean horribleness. I did get some compliments on Facebook, to which I said "not my style" but if this is the look you are going for, let me know and I can let you know exactly how to achieve it.
After seeing this trainwreck, I was heartbroken. What had I done?! I didn't hate the white that bad. I immediately threw the smallest piece in the washer with a full loads worth of detergent and the max allowed of bleach, and I hoped for the best. What came out was a light purpleish gray color that I could TOTALLY work with. It was light, like someone washed my slipcover with black panties, and I was glad. I stripped the couch again, repeated the same treatment to the rest, and got the same results.
That's when Andy and I went on a mission to by all of the "Pearl Gray" Rit dye in the city. We knew we would need a lot. Each box is meant for 1 lb of fabric, and our slipcover weighed 11 lbs.
First we went to Walmart. Went right to the laundry section and.... no pearl gray. EVERY other color in the world, but they were out of gray. So we went to Michaels. Straight to the aisle with the t-shirts and alas, only 2 boxes. We were shooting for 6, but really the more the better (we thought 11 boxes of dye was overkill) Then we went to the other Walmart on the North side of town. And yet nothing. We began to wonder if someone in Greeley was dying a lot of things gray and wiped out the supply! So we headed to the last logical place that is open on Sundays, Joann's. Now our Joann's is TINY and is in a strip mall next to a chinese restaurant so we were not optimistic, but lo and behold, 6 boxes of pearl gray. Even though we only really wanted 4, we grabbed all six because we figured 8 was closer to the recommended 11. 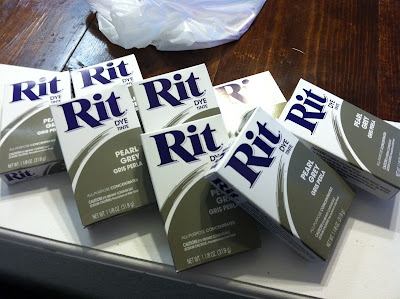 We read and re-read the directions (which were really quite vague) and we think we did everything correctly. It said to put 1 cup of salt for every box, and we split the load in half, with 4 boxes in each load. It also said to put 4 cups of water in the drum, but we have a front loader, so I didn't really get what it meant. The water would come from the washer.... Anyway, we decided to dissolve the dye and salt in a bucket of water, then pour that mixture into the washer and add the wet fabric then, and start the washer.
We prayed for the best, and determined that dying fabric is like making a baby. You mix all the stuff together and let it do it's thing, then hope it turns out pretty. Although we would keep our baby if it wasn't pretty.... we aren't that shallow....
So maybe it's not really like a baby at all. Bad analogy...
Anyway, we prayed for the best, and when it came out we had..... 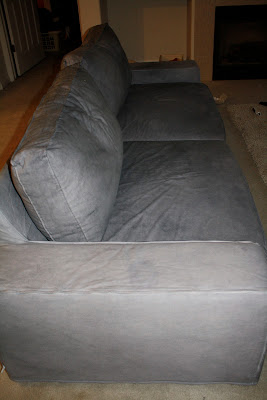 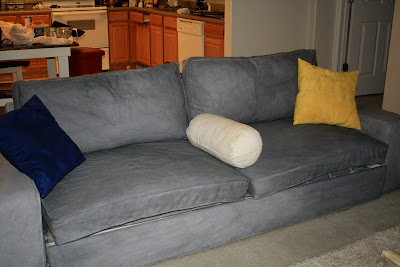 We are quite happy. This is the result we had hoped for in the first place.
Posted by Jess at 10:27 AM